6 months ago 3 min read
IEEE websites place cookies on your computer to give you the best user experience. By using our websites, you agree to the placement of these cookies. To learn more, read our Privacy Policy
Got it!

On November 17, DevFest’18 the biggest tech conference at Ankara was co-organized by Google Developer Group (GDG) and IEEE Hacettepe University Student Branch. The conference held in the capital of Turkey, and it was attended by almost 900 people who are interested in technology. Let’s get to know the organizers, before we talk about event details.

What is Google Developer Group Platform

The GDG platform is a membership level within the wider Google Developers Community Groups program and it offers tailored support to organizers of local GDG chapters.

GDGs are local groups of developers who are specifically interested in Google products and APIs. Each local group is called a GDG chapter and can host a variety of technical activities for developers – from just a few people getting together to watch our latest videos, to large gatherings with demos and tech talks, to hackathons.

IEEE Hacettepe University Student Branch was founded by the students of electrical and electronics engineering on November 1991.The student branch is currently working with hundreds of volunteers on different topics. Every year they organize many technical and non-technical events. Volunteers of IEEE Hacettepe SB, are mostly interested in computer, industry and medicine fields. Visit their web site for more information. www.ieeehacettepe.com

DevFest is a well-known event of Google Developer Group and it’s being organized every year in many cities.

This example partnership did a great job in recent weeks. DevFest’18 Ankara had almost 900 participants, and 200 volunteers worked for this event’s coordination. Event web site www.devfest.gdgankara.org

Sharing the same goals with local groups or nonprofit organizations can lead to collaborations. 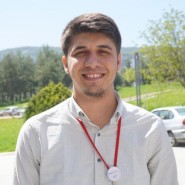